This will be the first post I publish in English, I apologise to all Spanish-speaking readers, but it is imperative that I practice my writing; therefore any comments and suggestions about it are more than welcome.
A few days ago I published in Facebook and Twitter a survey about smoking habits.
First evident question: what has to do with Victor’s research?
Nothing
The issue is that, since I began riding this to go to work:

I started to look at the floor much more and also started to notice things like the ridiculous amount of cigarette butts in the street. 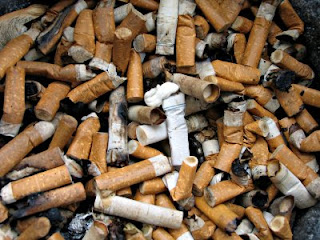 So I wanted to know how much of the total amount of cigarettes people smoke end up in the streets, gardens, etc. and no one picks up; I found out that it is almost half of them!
First a bit of numbers:
According to FAO’s website the production of tobacco in 2010 was 7,100,000 tonnes. Each cigarette weights about 1.2 grams, from which only 0.9 grams are from tobacco; that gives a total of 7,890,000,000,000 (7.89E+12) cigarettes a year.
There are 1,300 million smokers in the world, being, evidently China, the largest consumer with 320 million people poisoning their lungs.
And the market grows 1.5% annual; at that trend the market will double in size in around 50 years (if we manage to produce that amount of tobacco). For what I could find the European market is the second largest and is now saturated, so the big companies are focusing in developing countries.
There are 6 companies controlling practically all the tobacco industry: China National Tobacco, Altria, British American Tobacco, Imperial Tobacco, Japan Tobacco and Philip Morris International.
In my survey I was mainly interested in knowing how many cigarettes end up in indoors or outdoors and if there was a possibility of having a trash bin in the surroundings. With 40 people answering the survey the results are:
Where do you usually smoke?
15% Home
0% Work
7.5% Street
10% Garden
10% Indoors special areas
37.5% Outdoors special areas
0% other indoor
20% other outdoor
How many cigarettes a day?
74.4% 1-5
15.4% 5-10
0% 10-15
10.3% 15+
So I’m assuming that street, garden and other outdoors, in total 37.5%, are the ones mainly contributing to the problem; even if there is the possibility of a trash bin some where I will take this number as a base. I’m pretty sure that in less developed countries this percentage could be higher due to the lack of special outdoor areas and growing number of policies pushing people to smoke outside of buildings.
Having the total number of cigarettes produced and the above percentage, the number of cigarettes that end up in the floor is 2,960,000,000,000 (2.96E+12) worldwide.
The dimensions of an average cigarette butt are: 8mm x 20mm that gives a volume of 0.00000000101 (1.01E-9) cubic meters. Multiplied by the number of cigarette butts we have a final volume of 2,970 (2.97E+3) cubic meters, that is a cube about 54.5 meters per side, pretty much like the Pisa Tower in height. 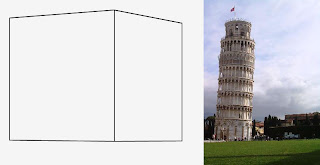 Lastly the weight of the cigarette butt is 3 grams (3E-6 tonnes). So this cube will weight around 8,880,000 tonnes (8.88E+6).
I hope my math is correct, if so, we are throwing that gigantic amount of cigarette butts into the streets and gardens each year. Do you wonder why the swage blocks on a heavy rain? This may be part of the answer.
I was thinking on ending this post with an image of a human lung with cancer, but it is too depressing and visually strong, I will end up just saying to our friends or family that smoke that we know it is hard, but definitely better to quit; and if there is no power on this galaxy making you quit, at least throw the cigarette butts to a trash bin, always!
Cheers.
Publicado por v g m en 3:33 No hay comentarios: