To design, or not to design, that is the question, or not?

This is one more exercise I did after going through all those databases from UN and other large institutions.

It is quite simple and by no means part of a serious research, is just a reflection on how much all humans produce and ideally how much each one of us could have if divided in equal parts.

It accounts only the "official" production, we need to bear in mind that small family crops e.g. for personal consumption are not included here.

Some may say that is an unrealistic thing to think of, and yes, it is virtually impossible to accomplish, but I wonder if could awake some part of our conscience and help us be more coherent with our context and reality. It is important to think that is not only the stuff we consume directly, it is also everything that is needed to produce the stuff we consume.

Some interesting things I could highlight: each one of us could have access to 1.33 square meters of gas, that is a large amount, we could do a lot with that. Coffee has zero nutritional value. Sugar, even if it contributes with a lot of calories they are not really that beneficial, turns out that nutrition is a bit more complicated that what it may seem.

The amount of CO2 relates to the amount each one of us would be responsible of if the current World generation was divided in equal parts, we all know that there are a lot of people that produces almost zero CO2 and others producing literally tons of it, the interesting challenge is how can the standards of living be raised for those on the bottom of the pyramid and maintained for those on the top without generating more CO2. 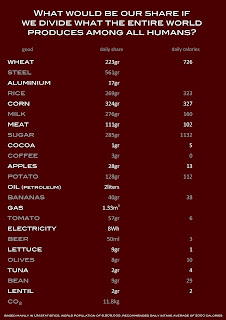 It has been always a matter of debate the blurry position of product design between the technical and the artistic; according to where the training takes place one can have a balance of both or tend to one or the other side. It is not a matter of discussion here to tag any of them about being the ‘correct’ or ‘right’ way of teaching and practising design, doing so would be pointless.
There is nevertheless for all, even if in minimum, a knowledge or general perception about what a good design is, searching for common grounds, appears to be accepted among a great majority of practitioners the 10 ‘commandments’ of good design from Dieter Rams.
Again, I will no enter now in the not irrelevant discussion if Rams’ points are to be followed verbatim, but it allows me to open the debate about designers’ creation of object culture or object cult, not only among their peers, but in the users they serve to.
Allow me to develop the idea, culture intended as the body of knowledge created through time and passed along generations and regarding to our matters, the taste acquired through intellectual and aesthetic training. The former a more accurate definition for the user as part of a general population without any specific training as the latter, perfect to recognise the designer, which is hammered through the years on teaching the eye to see ‘God in the details’.
Cult on the other hand is the devotion; the worship with that devilish touch of blindness that can lead the most centred one into harmful extremes. Cult may create as well a particular feeling of addiction; all these combined are a powerful mix for impasse and lack of questioning, which ultimately may lead to loosing touch with reality, and by reality I mean the events taking place in the context that make all of us inevitably interconnected and interdependent.
As a designer I reckon the overwhelming feeling emerging with the creation of an aesthetically sublime object, the limitless possibilities of merging it with a perfect functionality and coherent technology. But I question if this is not being used to create a blind devotion in the final user, than in itself is not necessarily negative. The structural perversion arrives when combined with the current macroeconomic model under which all modern society thrives.
It is no secret that the debt model forces us to seek perennial growth in order to avoid collapse and that the recurrent crises are not a symptom but rather a mechanism to fulfil the need.
This infinite economic growth linked to endless use and unplanned discharge of matter, within a closed system such as Earth, creates a time bomb that is not far away from exploding.
Encouraging people to enthusiastically participate in this is far away of being good design, and Rams falls short on the current demands.
The presumptuous conception of being above or below and unlinked to all previously described is one more tragedy of the commons, deep under we know we should do differently and some of us clean our minds with short term solutions (many times with worst outcomes), meanwhile feeding the beast.
I recently heard: ‘prey the gospels and only if necessary use words’.
The laziness from designers and design educators toward reading and better understanding other close related fields, and the continuous selfish attitude of boasting themselves, will ultimately relegate us to a secondary participation and relevance.
To my hands arrived a few days ago the analysis of the book Harvesting the Biosphere What We Have Taken from Nature by Vaclav Smil, MIT Press.
Without sensationalism and based in accessible scientific knowledge, he sets things in clear perspective: “Systems ecology teaches that the human population and consumption trajectories need a stronger feedback control than currently exists. Either we are smart enough to craft that feedback mechanism ourselves, or the Earth system will ultimately provide it. Unfortunately, the tragedy of the commons suggests that collective international actions to voluntarily reduce consumption are contrary to human nature.” This is juts the most recent report of a large set produced in the last 40 years, most of them ignored or unheard.
I can’t say change will not be painless, but will be greatly more painful not to.
Publicado por v g m en 2:20 No hay comentarios: