Is not data, is how you see the world

Almost since the beginning of my PhD I started to navigate into large databases, I was looking for information about countries, things like population, electricity consumption, GDP, etc. I did this work for a few months and the more I got into it the more interesting data I found, the UN has tons and tons of things, is overwhelming the amount; also the World Bank and several international agencies like the International Energy Agency, or even the CIA.
But slowly, something more interesting happened; at the same time I was going through all these statistics I was reading about macroeconomics, biology, thermodynamics and things started to mix, questions started to arise.
I have been always keen to countries’ statistical data, I remember as a child spending hours looking at the almanac, and I was used to see terms like population density, GDP growth, population growth, etc. Is the classical data governments and institution use to write their reports and create forecasts, strategies and policies.
But as I said, things can get mixed, and different priorities or focus to put the attention are, I guess, sometimes forgotten or not taken into consideration.
I started to make correlations out of the “classic” view and benefiting that I was learning Processing I decided to put into graphics some of my ideas.
Here four I find interesting, hope you do too.
Electricity consumption
People are normally not aware of how many watts-hour of electricity they consume, they know very well the bill they have to pay, but how relate that to the consumption of a country, or the average per capita consumption, what does it mean in a developed or underdeveloped country and their economic growth? 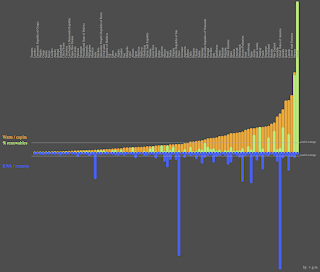 This first image, in blue you will see the total electricity consumption of each country, it jumps immediately to the eye India, China and the USA. The first two have a large total consumption due to the size of population and manufacturing industry, these two countries are below average in per capita consumption, the upper orange lines. As you may well know both countries are experiencing very important economic growth, what would it happen when they reach a first world country per capita consumption? Then you can think from the USA: they have a not so large population (compared to China and India) and great per capita consumption, nevertheless they seek economic growth, they want (like everybody) more.
If you look carefully some countries have a green line above the orange one, which is the percentage of that energy produced by renewable sources. Very notable is Iceland that is the country with the largest per capita consumption (by far) but practically 100% comes from renewable resources… remarkable!
GDP versus HDI and what about GDP growth?
If the goal of every civilization is to have a good quality of life we should start by defining what is good quality of life, and depending on the answer questioning ourselves if there should be a limit or if we should stop at any moment on pursuing a higher level, if there is such thing.
Until today almost all countries measure well-being through GDP growth, which is nothing else than an economic measure  “the sum of all value added to raw materials by labour and capital at each stage of production, during a given year” (Daly and Farley, 2004). The United Nations has an interesting tool called Human Development Index (HDI), that is fully dedicated to measure the quality of life through things that, for most of the people matter more: education, health, life expectancy among other socially relevant issues like gender inequality or multidimensional poverty. 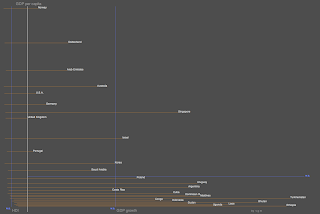 In the next image I place an orange horizontal line representing each country, the upper the line, the higher their GDP per capita, so you can see that Norway is the highest in this chart (is not the highest in the world). The more the line goes to the right of the image the more GDP growth that country has, and the more goes to the left side the higher the HDI. The vertical white line is zero for both GDP growth and HDI, and the blue lines represent world average for each measurement. In this way you can see that for example Singapore has a very good GDP per capita, above average HDI and extraordinary GDP growth, similar to Australia, Arab Emirates and Switzerland. It is very good to see that countries like Bhutan and Ethiopia have an extraordinary GDP growth, very needed to increase their HDI and GDP per capita, both below average (this not always is the outcome of GDP growth, ask to your confidence economist about “allocation”).
Just in short, if you compare HDI and GDP per capita for all countries you will see that after a certain level of income makes little or no difference for quality of life, besides showing the great inequalities between rich and poor countries (this image is not made with Processing is a boring excel chart). 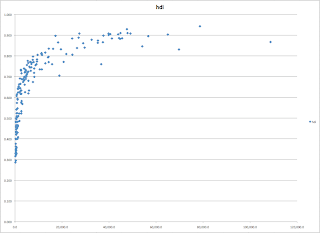 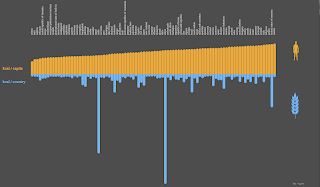 This image is similar to the electricity consumption one, in blue the total country calories consumption (how much food each country needs) and in orange the calories per capita. I haven’t marked the averages but it is not hard to see the “weight” of each country and understand if that weight is due to large population or large per capita consumption (or both), to my surprise Austria is the country with the highest per capita consumption. I’m thinking to add here in some way the total population; it will be easier to draw conclusions.
Population vs. arable land density
People have more or less an idea of how many people lives in a country and how big that country is, so you can imagine how “dense” the population may be, examples like, Singapore, Hong Kong, Bahrain or Bangladesh are dramatic. 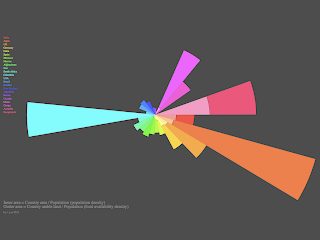 But I believe what is more important is not how many people can fit in one country, but how many people can that country fed? I found the amount of arable land per country and I created the “arable land vs. population” density, and cases that previously would not raise any alarm, suddenly become scary, like Colombia, Congo, China, Japan or the UK, they have little arable land for their population size, which makes them dependable of other countries.
One of my last conclusions and for many naïve questioning is: why if many countries with above average consumption or life quality and in definitely excellent conditions, keep on searching for growth? Some of these countries have a very low or even negative population growth. Obviously I’m not that naïve, I know the answer. I just found stupid this system that is growth-dependant and allows such inequalities, not only among countries but also inside their populations, and that the trend, even if economic growth is achieved, is increasing them.
I would like to do some interactive graphics next, with Processing I should be capable of switching between parameters in order to make more interesting correlations, the only issue is finding time to do it, I’ll let you know.
Publicado por v g m en 6:34 No hay comentarios: